Royal College Old Hostellers Association (ROCOHA) consists of past students who have been the boarders at the hostel of Royal College Colombo 07, Sri Lanka. It is governed by a committee appointed at the annual general meeting in line with its constitution.

ROCOHA is committed to strengthen the camaraderie among its global network and thereby support to develop its members as well as groom globally competent all round hostel students who can make our motherland proud.

A glimpse to the past by the founder...

When Dharmasiri Subasinghe and Rushan Sumanaweera gave the idea to form a past hostellers' association I worked on it. I spent a sleepless night deciding on the name of the organisation. With lots of thinking and difficulty, I took both 'R' and 'O' from the word Royal and came up with the name ROCOHA. I took the constitution of ORAC (Old Royalists' Athletic Club) and modified it to suit ROCOHA. We invited the oldest living hosteller at that time Mr. Arthur Subasinghe to be the President of the newly formed organisation. Then he was a member of the Hostel Advisory Committee, where I was a member too. We had the first meeting in the hostel dining hall in 1994. About 35 past hostellers attended the inaugural meeting. We then decided to form the association and also to open a bank account. That's how ROCOHA was formed. I have been honoured twice by ROCOHA for my founding efforts. I take this opportunity to thank the present ROCOHA Committee for recording the history and launching the website. Channa Ranasinghe, QSM. Founder and Honorary Secretary - ROCOHA, . Past President - United Sri Lanka Association in New Zealand. Wellington New Zealand 5 September 2021

How the thought emerged...

Every great thing has a humble beginning! Below are the words of Rushan Sumanaweera of 1983 A/L batch…

“It all began one sunny afternoon, after Priyantha & Lakshika’s (Ranaweera’s) homecoming took place at his beautiful home in Matale. Dharmasiri Subasinghe, Thusitha Jayasinghe, Mahesh Weerarathne, Jaliya Senadheera, my wife Pubudu & I decided to go for a walk. Hence, we went to Watagoda to revisit the haunts we used to frequent when we came here to spend our holidays with Priyantha as young boys. The date may have been March or April 1994. We used to spend many fun-filled days here, climbing the mountains of Wiltshire, bathing in the streams, etc.,

After the sumptuous lunch we had at the homecoming, we wandered along the golden paddy fields, a cool breeze fanning our cheeks and sat at a rock in the middle of it. The sound of water gushing down a beautiful waterfall nearby made us talk about our escapades in the past, when we were hostellers of Royal College. It was in this peaceful environment that this great idea of forming the Old Hostellers Association germinated. As we had no pen or paper with us, we stepped into a nearby “Petti Kade” borrowed a pen and paper and drafted a letter to the Warden of the College Hostel, requesting a meeting to form the Association.

After which, we had a cup of plain tea with jaggery and returned with the letter in our hands. Then it was ‘Sube’, with the assistance of Channa Ranasinghe (“Kotiya”), who organized the 1st meeting, which was held at the hostel dining hall on 12th August 1995.

This was the infamous beginning of Old Hostellers Association (ROCOHA) which has grown into a well-established outfit today.” 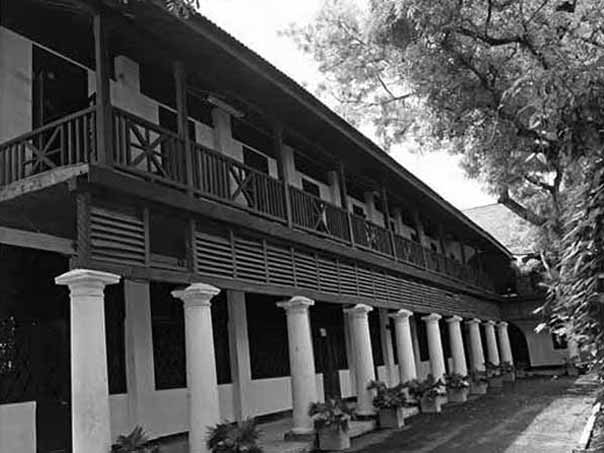 The men who groomed us...